❏ Class A “Field” Uniform – including neckerchief and slide

❏ Personal toiletries and deodorant (non-aerosol and no “body spray”

• PRESCRIPTION DRUGS - Must be in the ORIGINAL prescription container with instructions and labeled with Scout’s name. Send ONLY enough for the week – not the entire month’s supply please.

• NON-PRESCRIPTION DRUGS - Must be in the ORIGIAL container with instructions and labeled with Scout’s name.

• There will be no cell phones or electronics (iPods, MP3/MP4 players, handheld gaming devices, etc.) unless the Merit Badge calls for it.

• If a phone call needs to be made, Troop Leadership (SM, ASM) or another adult will contact parents regarding any emergencies.

One place to get texts for your Troop 147 information. New text messaging service will allow the troop to text your phone with reminders, times, etc. It's a one way service so responses are not accepted. Scouts may also join. This service is used by many teachers and schools to provide communication with parents, guardians and students. 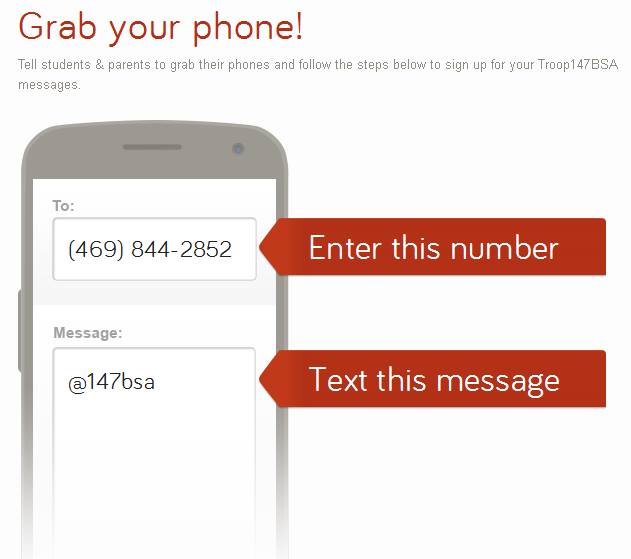 For those who are attending Silver Star Merit Badge College on February 8 and February 22, MB Counselors just received class lists this morning. Please watch your email for important information regarding requirements that may need to be completed prior to the start of MB College or items that youth should bring with them.

At this meeting we will hand out packing/gear lists, the trip itinerary, physical forms, the mandatory State of Colorado form that must be filled out with the physical form, etc. We will be available to answer any questions you may have.

If your son is registered for A-School, you can find the equipment list, etc on this website. I sent it to everyone in the troop thinking we might have some boys NEXT year that want to attend! I'll have copies of this information with me at Monday night's parent meeting. PLEASE make sure I give you a copy. My brain is pretty frazzled this time of year, and more than usual with a kid graduating and preparing for college.

At our parents meeting next Monday night, Julie will be handing out the gear lists for this Summer Camp trip. I thought I'd send a couple of pictures out for clarification and give you a little more time to find a couple of the big items. For this year's trip they will need a footlocker AND a backpack. I've attached pictures of each of these items. The footlocker can be purchased at Academy (that's where I got the picture) and it's $35. They sell a similar version at Walmart in the Automotive Department for less money, but it's not always easy to find. The primary requirements are that it's big enough to store your Scout's stuff, it's weather resistant, it can be closed and it can be locked. No wheels! Some of us have an extra lying around from previous years and will loan them out. I have one that Jonna isn't using this Summer that I will loan out to a responsible Scout. Since it will most likely be going to A&M with her in the Fall, we do need it returned in good shape.

As for the backpack, we always have some confusion over what that really is. The one they carry to school is called a "day pack" in Scouts. That's not big enough for a backpack for this trip. They need a pack with a frame that is big enough to carry camping gear and equipment. These can be reasonably priced or very expensive. Again, we have several that we can loan out from the Troop if your Scout will need one. We need to know ASAP so we can fit them with one.

We'll cover everything else at our meeting Monday night. Parents, if you have anything you can loan to another Scout, please let me know so we can help everyone who needs it. Remember, this meeting is mandatory if your Scout is going with us to Colorado this Summer! If you have your medical forms filled out, please bring them with you that night. We will gladly answer any questions. I will have all of the Scout accounts updated. If you have a question about your Scout account before that night, give me a call.

Due to the State Park getting rid of the campsites we normally use.... we are having to camp in the Primitive Area.

This means a couple things. We will not have easy access to the trailer (stove).

We will have adults with boats, that hopfully will agree to load everyone and their gear and take them to the campsites. The campsites do have lake access so this can be a fun new experience.

We can take the protable stove and camp stoves with us so no one will go hungry.

Scouts DO NEED to pack lightly just like they would if backpacking.

As new info comes available, I will let you all know.

Reservations for San Isabel Scout Ranch have been made for July 21 through 27, 2013. The reasons given for scheduling a summer camp so late are:

Cowboy Santas Community Service Opportunity
Scouts who are ages 14 and up may come and assist with packing on the following dates:
There may also be an opportunity to assist The Ranch (104.1) radio station with Cowboy Santas toy collection at Ridgmar Mall on Saturday, December 15th from 12 PM to 6PM. This is pending. More information to be provided soon. Julie Geho is checking on this.
Salvation Army Bell Ringer Community Service Opportunity
More information to be provided soon. Charlie Martin is checking on this.
Azle Parade of Lights
Saturday, December 1, 2012
Schedule for the day:
9:00 AM All Scouts to report to Martin Trucking Enterprises (Boyd, TX) to assemble the float
3:00 PM Complete float decoration
4:00 PM Line up for parade at Rock Elementary School
5:00 PM Parade to follow Tree Lighting Event
8:00 PM APPROXIMATELY Scouts will be dismissed following dissembling of the parade float.
Theme of the parade is "Hometown Christmas" and the theme of Troop 147's entry is "Charity begins at home..." and will feature various charitable ways in which the Boy Scouts assist the community.
Twin Arrows/National Youth Leadership Training (NYLT) Courses
Twin Arrows upcoming courses were discussed. There was much discussion regarding whether Scouts who would be aging out should be encouraged to attend this training. The overall feeling was that the training would benefit these Scouts even if they were unable to provide immediate and lasting leadership to the Troop and that they should be encouraged to attend. A list of interested Scouts was discussed and three were chosen to fill the three reserved slots in the December 2012 course. It was further discussed and decided that Troop 147 should reserve a minimum of two (2) and possibly three (3) spots in all upcoming courses so that additional Scouts might take advantage of Twin Arrows training. This training will be encouraged for our current Scouts and a wait list within the Troop will be developed for up and coming Scouts. To this end, we will reserve two to three spots for the 2013 Spring Break NYLT course.
Aquatic School 2013
Aquatic School was discussed. This will be held July 15-21, 2013 at Worth Ranch. There are at least three (3) Scouts interested in taking this course and names were taken regarding this leadership training opportunity.
Christmas Campout 2012
Christmas Campout was discussed. Drop off time for Scouts will be 9 AM on Saturday morning. It has been a YPT issue for Scouts to arrive on Friday night and to eliminate this conflict, only Saturday arrivals will be allowed. Dinner will be at 3 PM and will feature 2 deep fried turkeys and 1 smoked turkey and 2 hams. Committee members will provide two (2) gifts not to exceed $20 total in cost for the boys' Chinese gift exchange. There are still room for stocking stuffers. Interested parties should contact Angel Unger or Marcey Martin. Please RSVP via email or text to Marcey Martin with total number in your family that will be attending.
2013 Activities Calendar
Based on the Scouts' requests, the following calendar of activities was set for the 2013 calendar year. Exact dates may be found on the Troop Calendar.
January 2013 Granbury/Dinosaur State Park Backpacking
February 2013 Sid Richardson Scout Ranch Survival Campout
March 2013 Athens, TX Fishing/Freshwater Fish Hatchery
April 2013 Fort Worth, TX Camporee
May 2013 Sid Richardson Scout Ranch Rock Climbing
June 2013 Location TBD Shooting Sports
July 2013 Colorado - San Isabel Scout Ranch Summer Camp
August 2013 Sid Richardson Scout Ranch Kayaking/Canoeing/Sailing
September 2013 Irving, TX SCUBA/National Scout Museum
October 2013 Austin, TX Capitol Area Tour
November 2013 Wichita Mountains Bouldering
December 2013 Camp Sandy Christmas Campout
Additional 2013 Dates:
April 8, 2013 Spring Court of Honor
April 11-13, 2013 Texas Motor Speedway fundraiser
May 4, 2013 OA Ordeal - SR2
May 18, 2013 OA Ordeal - TAH
June 7-8, 2013 Texas Motor Speedway fundraiser
August 12, 2013 Summer Court of Honor
November 1-3, 2013 Texas Motor Speedway fundraiser
December 7, 2013 Azle Parade of Lights
2013 Troop Committee Officers
The following slate of officers was proposed and approved at the meeting.
Committee Chair Marcey Martin
Treasurer Teresa Gonzales
Secretary Julie Geho
Assistant to the Secretary Crystal Hillier
Scoutmaster Charlie Martin
Advancement Chair Kim Allen
Fundraising Chair Lindsay Foster

Congratulations to our new Troop Leaders! Thank you to all the boys who ran for election. It is never easy to get up in front of everyone and give a speech.

Nathan, Joe, Alex and Jeremy were not at Scouts when Patrols were realigned. They will be put into a Patrol at the next meeting they attend.